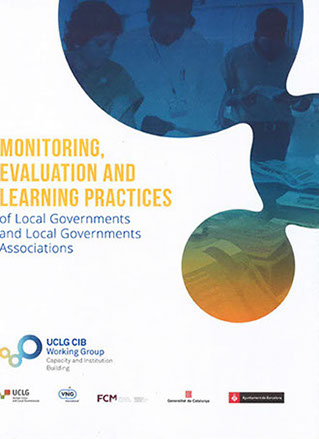 Based on the experience gained in our projects, VNG International actively contributes to policy development at national, European and global level. Here is an overview.

VNG International is an active member of the Development Partners Network on Decentralisation and Local Governance (DELOG), a group of 29 bi- and multilateral development partners, organisations and associates. In May 2018, VNG International hosted the network’s annual meeting, in The Hague. The focal topic was “Decentralisation and local governance in the context of fragility, migration and forced displacement”. Besides the focal topic, discussions and working groups dealt with the topics of Localising the SDGs, Fiscal decentralisation, and Urban and Territorial Governance.

VNG International is also Chair of the Capacity and Institution Building (CIB) Working Group of the global organization of United Cities and Local Governments (UCLG), with the Federation of Canadian Municipalities (FCM) as co-Chair. Members of the Working Group are practitioners from local government associations of cities that implement capacity development programmes for local governments and their associations around the world. In 2017 we developed a publication on the practices of members in Monitoring, Evaluation and Learning. In 2018 we are building on this exercise by developing an analysis of the evaluations that have been carried out about our programmes to identify the common lessons learned. There is also a fruitful exchange on the methodologies used by members to integrate the SDGs in their organizations and in their international programmes, as well as a contribution to the local government reporting in the UN High Level Political Forum on the progress of the SDGs.

Preparations have started for the second edition of the UCLG Peace Prize, for which VNG International provides the secretariat and expert support. The triannual Peace Prize aims to celebrate successful local government initiatives in preventing conflicts, building bridges and dialogue after conflict and promoting a peaceful environment. It honours the most successful initiatives, and makes a wider selection of good practices more well-known to inspire. The first edition was in 2016.

As an active member of PLATFORMA, the European coalition of local and regional governments – and their associations – active in city-to-city and region-to-region development cooperation, we operationalised the jointly developed CONNECT mechanism through pilot exchanges in Colombia, Ghana and Cambodia. Furthermore, we provided input to different position papers of PLATFORMA, notably on the foreseen changes to the CSO-LA instrument of the European Commission.

The SPHERE project brings humanitarian NGOs, UN agencies and the Red Cross/Red Crescent family of organisations together to define worldwide humanitarian standards and indicators. Some local governments use them to define minimum service standards too. In the second half of 2017, we joined the effort to update the standards and indicators, with the aim of making them ‘urban- and local governance-proof’. This is part of our commitment to make local government and humanitarian aid work together productively and builds directly on our experiences in the field.

In the same context, and building on our work in Libya and Tunesia, we supported one of the Dutch members of the EU Committee of the Regions (CoR), Mayor Hans Janssen, in his capacity as rapporteur for the CoR on the joint communication of the European Commission and the High Representative of the Union for Foreign Affairs and Security Policy, on “Migration on the Central Mediterranean route. Managing flows, saving lives” (Join (2017) 4 – Final). His report was adopted in the plenary session of the CoR in July 2017.

VNG International also supports the municipal members of the Dutch delegation to the Congress of Local and Regional Authorities of the Council of Europe. In March 2018, one of our members, Mayor Harald Bergman, presented a handbook on how local governments can promote human rights. It focuses on three groups: 1. refugees, asylum-seekers and migrants; 2. Roma and other nomadic peoples, and 3. LGBTI-persons. Furthermore, the handbook contains some 65 examples from 25 countries. Also in March 2018 we welcomed a Congress mission as observers on the occasion of the Dutch municipal elections. Their findings were used as input for innovations related to the electoral process in the Netherlands.

In the Netherlands we actively promote the role of local governments in the implementation of the SDGs or Global Goals. In the running-up to the municipal elections, in March 2018, together with 31 (vice-)Mayors, we called upon political leaders to use the SDGs as a source of inspiration for the municipal policy programmes for the coming mandate. Many municipal programmes now do indeed make an explicit connection between the various chapters on social, environmental and economic policies and the corresponding SDGs. Invited by the Dutch government, we wrote a chapter on the contributions by Dutch local governments, for the national report on the implementation of the SDGs. VNG President, Mayor Jan van Zanen, is also a member of the official Dutch delegation to the UN High Level Political Forum. In various ways (publication of guidelines, exchange of best practices, workshops, advice, organisation of joint events) we encourage Dutch municipalities to join their peers in our Municipalities4GlobalGoals campaign.

And to make the picture complete, we actively contributed to policy consultations by the Dutch ministry of Foreign Affairs, providing input for a.o. the policy note of Sigrid Kaag Minister for Foreign Trade and Development Cooperation, published in May 2018. 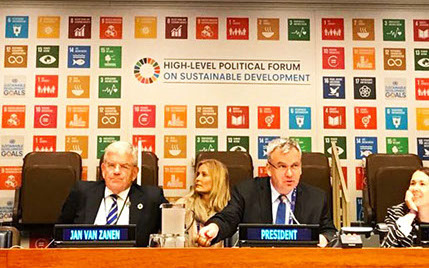